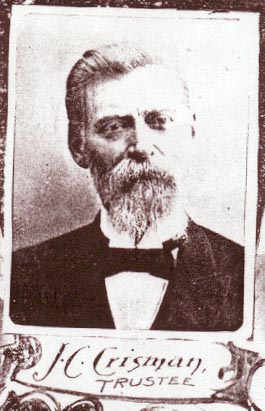 Rev. J. C. Crisman, pastor of the Christian Church, comes from German Lutheran ancestors, who went from Saxony to Virginia in 1748.  In the war for independence they were all loyal to America and his great grandfather was in the Revolutionary Army for six years and present at the surrender of Cornwallis.  Mr. Crisman was born in Pennsylvania sixty-one years ago; was educated in the common schools and Allegheny College; received his first license to preach at the age of eighteen and his first pastorate at twenty.  In 1877 he was prostrated from overwork while preaching in Illinois.  After a partial recovery he came to California and went first to Auburn, Placer county, where he made some successful investments in real estate.

In 1891 he came to Redlands, but in April, 1892, he left for Newton, Kansas, where he had been called to minister.  Two years afterward he returned to this city for a permanent residence, and, with his family, enjoys a pleasant home on Cypress avenue.  At the election held April 13, 1896, he was chosen a member of the board of trustees of the city, the term being for four years.

The first services of the Christian Church in this city were held February 20, 1892, Mr. Crisman being the pastor.  After his departure for Kansas these services were discontinued.  Recently, however, the church has taken a fresh and vigorous start and is now in a prosperous condition under his ministry.  The society hold their meetings in McGinness Hall.