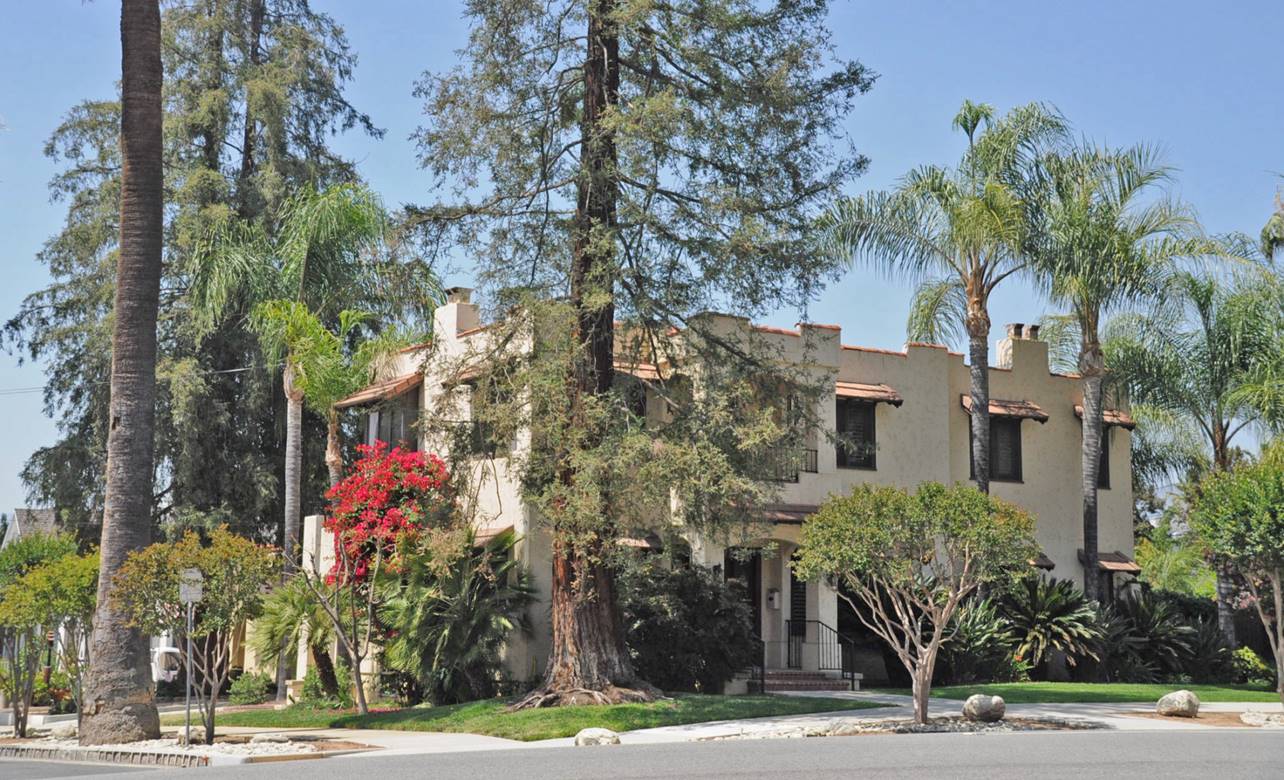 Mr. William Batty was born in Canada in 1857. After retiring in Toronto, he came to Southern California in 1918 and started a new life as a builder. By 1920 he had arrived in Redlands. His first project was large, five homes around Fern and Buena Vista. He, his wife Mary, and his sister Alice lived in the largest one while he completed 28 W. Cypress Ave.

Mr. Batty decided to build what might be termed a Spanish Eclectic style stucco house. It is two stories, and shows off a roofed porch above the covered area by the front door, and a second set of two covered porches on a side elevation. What catches the eye first is the roof silhouette of irregular parapets extending beyond the flat-leveled roof. Most of the windows have dark wood flat frames with brackets supporting small roof-tile awnings. A garage was built for each dwelling, but cannot accommodate a car of today.

28 West Cypress is on the corner and wraps around onto Fourth St. This house is actually a duplex as it has a common wall with a smaller unit facing Fourth. This apartment is around 900 sq. ft., and has always been rented out by whoever owned the main house. It has some of the same features: beautiful interior French doors, hardwood floors, and similar newel posts on the stairways. The materials are finer in the large unit, such as Honduran mahogany, and it even has a second staircase. All these features have been highly regarded by the current owners, Scott and Bernice McGraw. They also are grateful for the partial cellar.

Mr. Batty finished the house in late 1927. It is not known if his wife, Mary, even got to enjoy her new home, as she died in early 1928, and the newspaper article about her death gave her address as the older one on Fern. In 1929 Mr. Batty married Redlands nurse, Carrie Walter who was 21 years his junior. Alice Batty continued to live with them. She died in 1943, and William died in 1944. Carrie continued enjoying the house until her own death in 1956. At this time, ownership passed to William and Mary’s daughter, Nellie and Frank Scott. Frank’s death in 1970 was the end of 43 years of continuous occupation by this family.

Mr. Vernon Lee purchased the home in 1970 and began renting it to families, the first time children had ever lived there. In 1981, current owner Bernice saw a sign out front and rented it sight unseen because she was so attracted to its style. She eventually convinced her landlord to sell it to her and she embarked on an adventure to restore the property to its fullest potential. She always sought out the best workmen, carpenters, electricians, and other craftsmen who loved working on vintage homes and knew the old methods of construction. The house needed to be re-stuccoed. Bernice found someone to re-create the “cat’s face” finish that was original in 1927. Her favorite project has been the large entertainment area centered on the swimming pool. She had new walls, an outdoor food preparation area, and a lovely gazebo constructed.

Both Scott and Bernice treasure the original fireplace surround. The soft earth tones of handmade tiles depict a Spanish-type rancho, ox carts, and a man with sombrero. It resembles the work of Batchelder, but was created by Claycraft Potteries (1921-1939), in Los Angeles.

The hard work and attention to detail of current owners Scott and Bernice McGraw ensure that William Batty’s home at 28 W. Cypress will continue to enhance their Redlands neighborhood. The Redlands Area Historical Society is pleased to present them with a 2018 Heritage Award.