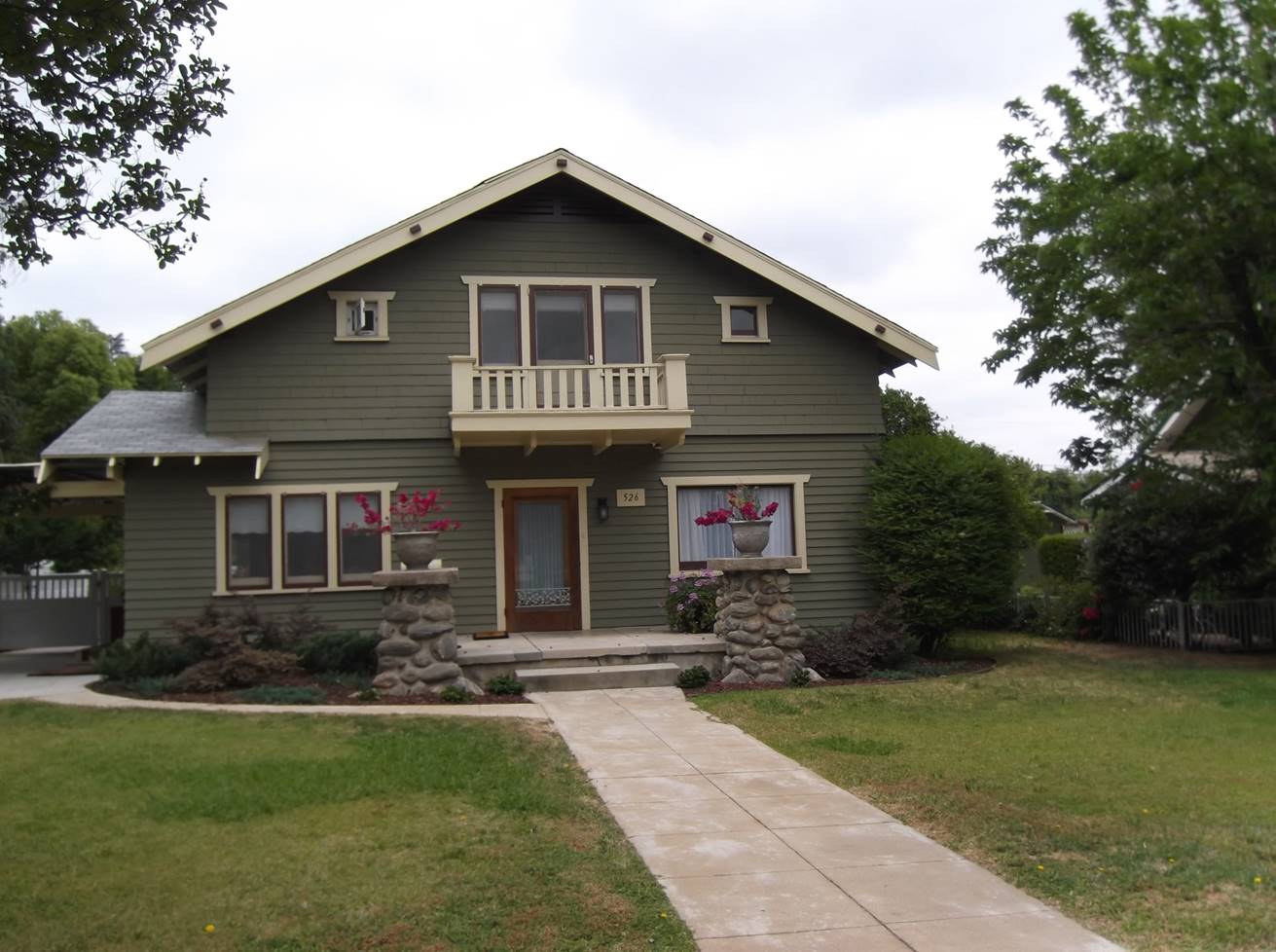 This property was first owned by Anthony G. Hubbard, a mining millionaire. According to Redlands city directories, Frank Sanford was Hubbard’s private secretary. A building permit was issued on July of 1912 in F. E. Sanford’s name, but no tax records show improvements on this property until 1913 under A. G. Hubbard’s name for $2,100. Was this a gift to the Sanford’s or a loan? San Bernardino tax records show Mr. Sanford owning the property from 1913 to 1928 along with his wife Alma. Frank Eugene Sanford was born August 1864 in Indiana. He married Alma in 1895 in Los Angeles and died in Orange on October 27, 1926. Alma was born 1866 and died November 4, 1922. Both are buried in Hillside Cemetery in Redlands.

526 Alvarado is a two story Craftsman style with a medium gable roof with projecting rafters.  The siding on the second story is wood shingle and the first floor ship lap. The house has an interesting combination of two and three sash windows with flat board trim that open in. The east facing front has a center door on the second story that opens onto a wooden balcony with wood posts and a wood slate balustrade. This balcony extends over the centered front door. This door has a large rectangular glass pane with wood below. A wood screen door covers the door. Two cement steps lead to the cement porch with two rock step piers and a balustrade that matches the balcony.

From 1928 to 1936 the Sanford’s daughter, Aline, owned the property. In 1939 Pansy Knoll Jensen and Harold W. Jensen purchased the property. Redlands survey form shows them here in July of 1974. In between 1939 and 1974, the Redlands city directories list others living here.  City building permits list Richard Reiter in 1993, Scott C. Kunkler 2010, John Dinkelbach 2012, and 2014 the present owner, Estaban Guatarrez.

Mr. Cautarrez was born in Uruguay and came to the United States to Miami, Florida eighteen years ago to further his education. He is an architect by profession. Mr. Guatarrez lived in New York and Los Angeles before moving to Redlands. He was looking for a Craftsman style home as he liked the architecture. In a year’s time he has remodeled the upstairs and created two bedrooms with two bathrooms, office, TV sitting area, walk in closet, and utility room. He also replaced all the dry wall and wood flooring on the second floor.  The first floor he turned one of the bedrooms into a TV room and added barn style doors. The downstairs bathroom was redone and a bench was added in the kitchen sitting area. Mr. Gautarrez kept as much of the original interior as possible. There are glass pocket doors leading into the dining room and the dining room and kitchen share built-in cabinets. The landscaping, especially in the back yard was all redone.

The Redlands Area Historical Society wishes to thank Estaban Gautarrez for choosing 526 Alvarado for his home.