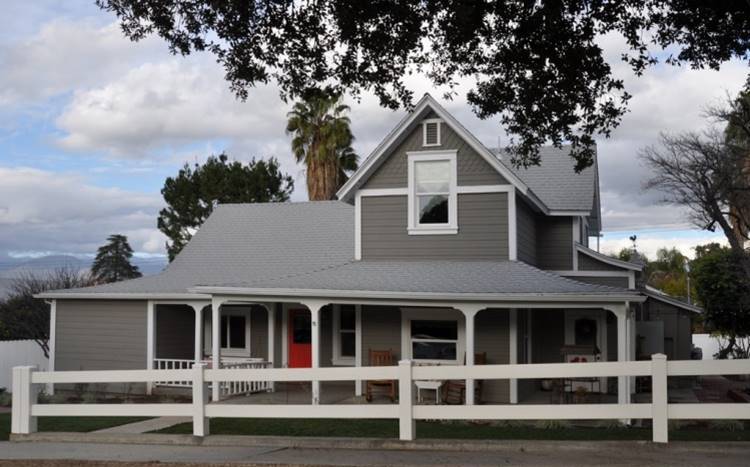 This 1893 Victorian farm house began surrounded by an orange grove and located on Clifton Avenue. The home lost its original barn/carriage house to the 1960s themed subdivision streets Robinhood Lane, Sherwood, Greenwood, Friar Lane, King’s Way, and Nottingham. The 25 acre orange grove is gone, but this island of the past remains on a half-acre lot that is very much appreciated.

Horace Young Evans Jr. first arrived at the fashionable Stewart Hotel in San Bernardino from Philadephia in February 1888. Evans bought land in the Terracina development from Clifton Street south to Cypress and from San Mateo to Sunnyside comprising over 25 acres planted in citrus. He built a shack for $300 in 1889. His father died in 1890 leaving a half-million dollar estate.

Horace and Sue hired T. R. Griffiths, later A.K. Smiley Public Library architect, to design their $5,000 Victorian farm house in 1893. This cross-gable home has had extensive remodeling. The rap-around porch has curved support rafters and decorative brackets. Square wood pillars support the porch with its wooden deck. The entrance porch has a colorful front door and swing chair. The south side of the home was added onto with a two-brick thick cold storage room that still has the Union Ice window. The south side once again shows the cross-gable. The east side of the home was extended for a bedroom enlargement and larger kitchen. The north side has extensions for the bathroom that included a bay window. Wood siding is used to match the original wood of 1893. Framing is all done in redwood. The spacious side yard and backyard now has a patio, fountain, and birdbaths with numerous fruit trees. The current garage replaced the large barn in 1973. The original attic cistern foundation table and plumbing remain strategically above the original bathroom.

Evans was a sporting man. He participated in the YMCA 100 yard dash races and in 1895 helped organize the Redlands Cycling Club. He became a timer for rugby competitions in Fiesta Park. Sue joined the Octagon Club with other wealthy members. The couple became winter residents with summer homes in Coronado and San Francisco. The papers record their vacations at the fashionable resort hotels each summer and social parties in Redlands.

Horace incorporated the Redlands White Star Laundry for $50,000 in 1903 with John Logie, R. H. Myers, A. H. Holgate and, Henry H. Ford. Redlands hotels found the laundry located on Orange Street convenient. Horace bought the Windsor Hotel in 1905 with John Height and Mrs. Mary Prendergast for $20,000. Beginning in 1906, Horace and Sue began renting the barn/house composed of six rooms completely furnished and the use of the horse, runabout, cow, and chickens. Horace and Sue divorced in 1911 and Horace moved to Santa Ana where he died in 1936. Sue remained in the home with her daughter. She advertised in 1911 for a finishing governess who could teach English, French, and German, as well as music. Sue McAbee Evans, secretary of the Red Cross Chapter, died of pneumonia in 1917.

The City Directory lists Charlotte, Josephine, and Margaret Eneroth living in the home from 1916 to 1920. Margaret might be the music governess for Eleanor Evans (Mannion). Joseph and Amelia Moura became owners from 1921-1935. Joseph was both a rancher and gardener and lived in the main home. Manuel S. Moura and Ida May lived in the house/barn. Manuel worked for the Southern California Gas Company as a plumber. John Silva celebrated his daughter’s sixth birthday in 1934. In 1936 James H. and Marjorie Thomas lived at 1334 Clifton or the main house. Joseph and Hazel Moore occupied the main house from 1939 to 1944. Anthony J. and Eleonore Soares occupied 1334 ½ during the same period. Joseph Moore had a welding shop and Anthony Soares was a mechanic and half owner of Figueredo & Soares welding at 121 Beacon Street. For several years Richard and Pearl Hardin rented the barn. In 1944, Mrs. W. F. W Magner conducted a lawn party for members of Sacred Heart Church. C. Dietz advertised his pinto riding horse for sale in 1946.

Robert M. Van Voorst is listed as the owner from 1950-1961. Robert worked for Tri-County Concrete and then as a checker for the Weber’s Bread Bakery. The barn was occupied by Arley Jenkins, a carpenter and then Cary F. Ley, an engineer in the navy. In 1953, a bull calf in the barn was advertised for sale. Mrs. Harold W. Hill had her daughter in the barn in 1954.

Paul R. and Martha Bendemire became the owners in 1961. Paul was a planner at Norton Air Force Base. Bendemire remodeled the front and side porch and bathroom in 1970. He built a new garage barn north of the house in 1973 for $3,000 and ignited neighborhood angsts when he painted the new garage red. Bendemire built a greenhouse, improved the electrical box, connected to the city sewer, built a crafts room and screened in part of the rap-around porch. His tragic death in a 1977 Alaska airplane crash ended a period of major renovation. The last owner before the present was Peter Brusati from 2011 to 2013.

Kim Ennis and Ken McCrory bought the home in 2016 and have repaired rotten window trim, removed years of debris, cut dead trees, landscaped the half acre, and built a fence, fountain, and bird baths.

Kim did 99% of the research for this citation and obviously with Ken deserves this 2017 Redlands Area Historical Society Heritage Award.